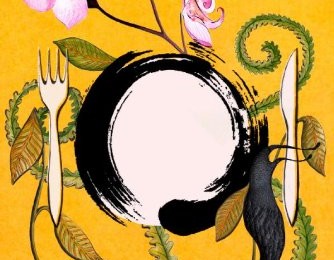 Feeding Orchids to The Slugs

This, my first blog post of 2013 is a review of a book which, although contains recipes, is most definitely not a cookbook. So what is it?

Reading as the memoirs of someone I’d not previously heard of (Florencia Clifford) transforming her approach to life and food, it’s certainly not the kind of book I’d normally pick up from the shelf. But now I’ve started, it’s hard to put down again.

Starting out at a retreat in mid-Wales, the book sets the scene of open countryside and rolling hills. Florencia began her journey here working in a Zen kitchen; this becomes a lifelong change in her attitude to food and where it comes from, and it’s one she takes us along on.

Still not convinced? Neither would I be. I’m guessing you’re imagining long, drawn out paragraphs with boring language. Allow me to quote:

The purple potato side dish from the previous night’s curry had turned into a colourful Spanish omelette with a bit of an Indian flair. I had never before used purple potatoes, but I would do so again as I found the colours wonderful to work with and the texture waxy.

Now, that wasn’t so hard was it? It’s this kind of writing that drew me in to the book; simple and easy to relate to. I’ve read a few other reviews of “Feeding Orchids to The Slugs” on the net to see how other people described it; “evocative” seems to be the word used the most, and I couldn’t think of a better one myself.

The recipes in the book are – as you might expect – typically vegetable based and homely, covering all types of ethnic cuisine. The one I couldn’t avoid was simply entitled “Porridge”; not a single page recipe, but a whole chapter of the book, finishing with the fantastic sounding “Gomasio” (made with sesame seeds) and dried fruit compote.

Put simply, Feeding Orchids to The Slugs is the best book I’ve ever thought I’d not want to read.

Feeding Orchids to The Slugs is out now and is written by the fantastic Florencia Clifford. It’s available from Amazon and all good retailers, priced at £15.19 at the time of writing.