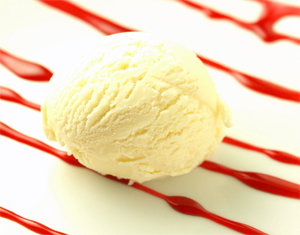 While this recipe hardly reaches Heston Blumenthal like levels of kitchen experimentation, it’s certainly raised a few eyebrows. For some reason most people still seem to frown at the idea of a vegetable making an appearance on their desert platter – people that no doubt munch happily on carrot cake without even considering the connection.

It’s not even as if it’s an entirely new concept (a quick search on Google proves that). A few years back I was having dinner in a local restaurant (Winteringham Fields) with family when it all went a bit wrong. One member of our group had indulged a little too much in the fine wine on offer and started arguing with a nearby table – not normal behaviour for a fine dining establishment, and embarrasing to say the least. What really annoyed me was when he went to the extreme of telling the waiter to take away our deserts – mine included – in no uncertain terms. Argue, make a scene, but don’t interfere with me and my food!

I can’t quite remember what was on the menu that day, but what I do remember is that the desert was served with a parsnip ice-cream (a quick look at the current menu on the website suggests it was possibly “Coulant de chocolat noir, glace au panais“). My version tries to re-create that concept – whether right or wrong – and tastes pretty good if I do say so myself.

So, while parsnip in an ice-cream might sound odd it actually works really well; the closest taste I can describe it to is probably coconut, although that association is a bit of a stretch if I’m honest. The only way to tell is to try it yourself – I doubt you’ll be disappointed, and will probably find it curiously enjoyable in a kind of “I’m not sure – let me have some more to decide” kind of way.

The beetroot syrup is an addition which can easily be skipped if desired but certainly does nothing to offend the parsnip ice-cream itself. Visually the deep purple colour contrast on the pale white ice-cream is appealing (certainly to my eye) and also adds another level of vegetable-desert flavour experimentation. Beetroot works surprisingly well when mixed with other sweet flavours such as apple (in a soup, sauce or juice, for example), so it really shouldn’t come as a shock to find that it also works here.

Surely I’ve convinced you by now to give it a try?

Aside: After typing this up – but before posting – I read an article on the BBC News website about Breast Milk Ice-Cream now on sale in Covent Garden at £15 a portion. Would you try it?

For the parsnip ice-cream:

Begin by bringing your milk to the boil in a heavy bottomed pan, then reduce the heat down to a simmer. Add your parsnip and allow to bubble gently until softened. At this stage turn add the sugar and salt and stir until dissolved.

Turn off the heat and pour in your double cream, stirring well. Purée with a hand-blender or food processor, push through a sieve, and allow to cool before refrigerating until totally cold (overnight should be fine).

When you’re ready, follow the instructions of your ice-cream maker to churn (I use a KitchenAid attachment).

For the beetroot syrup:

This is basically a syrup where the water has been replaced by beetroot juice. The usual stock syrup rules of 2/1 sugar / water apply, as below:

You can do this several ways; cook, peel and puree your beetroot before passing it through a muslin lined sieve to extract the juice (a bit of a squeeze helps here), or use shop bought beetroot juice where available.

Simply place the sugar and juice into a pan and bring to the boil, leaving for a couple of minutes to reduce down to the desired consistency. If you find the taste a little too strong, make the syrup with a sugar / water mix, adding the beetroot juice later and reducing down to suit.